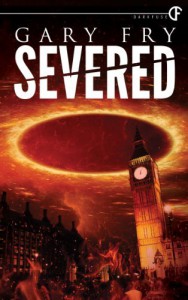 The idea behind this short novella is that the human..yes you and I have two sides to our personality, an emotional side and a moral side. What stops us being out and out bastards! is our moral conscience and if we did not have this conscience then there would be no inner body policeman and all hell would be let loose..." The fundamental division in human life was not between body and soul, but between an emotional and a moral being. And it was the way one governed the other that served as the principal determinant of behavior." Severed is the spreading of a virus amongst the populace that allows our moral side to drift skyward as what could best be described as an organic white cloud, leaving our emotional side as a zombie full of hate and loathing. Can Professor Stephen Hobbs, a man with an almost schizophrenia personality disorder, save the day. Apart from the initial idea this did not really work for me and I found both the writing style of the author and his execution of the storyline somewhat tedious and made this a difficult read to finish.