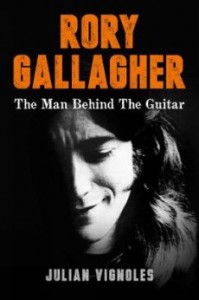 Rory Gallagher was one of the greatest Irish rock musicians of the mid 70's. A shy impressionable young man who was only truly happy when he stood centre stage and performed as only he could in front of his adoring and worshiping fans. However underneath that sensitive persona was a man uneasy in his own company, restless, unable to settle preferring to tour endlessly. In the quiet dark moments he consumed an increasingly dangerous amount of alcohol and prescription drugs (prescribed for him to combat his fear of flying) Julian Vignoles has written a sympathetic moving biography complete with many pictures of Rory the musician at ease and on stage. Everyone who spoke about Gallagher had nothing to offer but the highest praise; his professionalism, his approach and dedication is all the more poignant when we realize how disillusioned he became in later years, his drug and alcohol dependency leading sadly to his premature death. A wonderful read that for me personally held many memories and a great tribute to a quiet gentle musician.