When truth is stranger than fiction 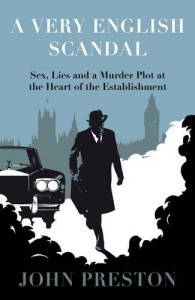 The story of a government MP who uses and abuses his position of power to not only funnel funds but also amazingly to arrange the murder of his on/off lover Norman Scott, makes for surreal reading. Jeremy Thorpe was a respected eloquent Liberal MP and under the guise of a suave persona he was frightened to reveal to his friends, and in particular his constituents, that he was homosexual. In the politically correct world we live today such a revelation  would have had little impact in comparison to the frightened and conservative attitude of 60/70's Britain.

Norman Scott had received and retained a number of sensitive and very private letters from his lover. Thorpe was terrified that Scott would use this correspondence to blackmail him and reveal to the world at large secrets of his personal life. When all attempts to retrieve the letters failed Jeremy Thorpe unbelievably decided his only real option was to arrange the execution of Scott. What follows is somewhat farcical; when the hired gunman shoots Norman Scott's dog and turns the weapon to his intended target the said gun jams leaving the hired executioner no option but to flee leaving in his wake a frightened and perplexed Scott.

The world of politics is often a murky arena where the privileged few appear to operate without any thought for the feelings of others and more importantly refusing to accept any accountability. Yet equally the morals we purport to hold today seem no better than the misguided assumptions of 60/70's London. We need look no further than the recent "Windrush" scandal where the home secretary Amber Rudd clearly lied when questioned by a select committee. The fact that the government then replaced the disgraced MP with an ethnically acceptable minister cannot escape the sour taste of duplicity.

"A very English Scandal" was certainly a very informative, witty and entertaining read. The trial that followed the bungled assassination attempt resulted in Jeremy Thorpe being acquitted but it marked the end of his political career. His government seat disappeared under the march of conservatism and the emergence of a new firebrand, the dictatorial  residency of one Margaret Thatcher. The novel also makes mention of Cyril Smith, one time heavyweight Liberal MP for Rochdale, and Jimmy Savile a well known TV personality. It is equally disheartening to realise that these repulsive individuals were able to carry out such vile acts of sexual abuse of the innocent never to be unmasked until after their deaths, even though there was overwhelming evidence. In the case of Cyril Smith the Greater Manchester Police, for their own reasons, choose not to bring Smith to justice in his lifetime and for that they should hang their heads in shame.