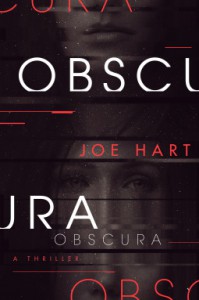 One of the most memorable images I store from my childhood is the idea of the teleporter. You know the program; Capt James Kirk daring to go where no one had gone before and in order to do this he uses the magical services of what was affectionately known on Star Trek as a transporter or teleportation machine. The transporter converted a person into an energy pattern (dematerialization ) then beamed to a target (place) where it was converted back to matter (rematerialization) I tell you this because "Obscura" the excellent new novel by Joe Hart uses this idea as a central theme.

Doctor Gillian Ryan is a recognized expert into research concerning a dementia type illness known as Losian's disease. She has lost her partner Kent to the condition and disturbingly her daughter Carrie is now showing signs that she may also suffer from this life threatening affliction. Research for a cure is expensive and with funds running low she is approached by an old friend Carson who has a proposition for her that may be her salvation offering unlimited funds for her research program if only she will repay his kindness in the following way...Ander's transport is a teleportation system which causes  atoms that make up a human body to be first frozen solid then vaporized before emerging at a secondary location as a solid human mass once again (think Star trek) However the users of Ander's transport appear to have been stricken with symptoms similar to Losian's namely memory loss, trances, and violent uncontrollable impulses. If Gillian will help NASA find a cure, travel to the space station via shuttle, then they in their turn promise unlimited funds with research into Losian's disease, and with time running out for her daughter she has little alternative but to accept. However she soon finds herself caught up in a web of deceit and lies, a nightmare three month journey to Mars, a conspiracy that feeds into her own paranoia, with real fears that she will never see her home or her precious daughter again.

I love this type of SF based story where the human race is concerned not only with the decaying state it's planet (melting of the ice caps etc) but also with the need to reach out and discover other solar systems, other civilizations, potential areas that we can populate and yes..."to boldly go where no man has gone before" Joe Hart has written an intelligent thought provoking novel raising question and ideas that are pertinent to society today. I thoroughly enjoyed and highly recommend. Many thanks to the good people at netgalley and the publisher Thomas & Mercer for a gratis copy in return for an honest review and that is what I have written.