A sad beautiful biography of what could have been 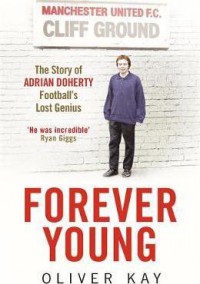 When I was a youth and growing up in the wilds of Northern Ireland most of my contemporaries, if they had the slightest interest in football, were in awe of one team only, Manchester United, and in particular one player: George Best. I mention this because as much as I knew about the life of this precocious talent I knew next to nothing or in fact had never heard of Adrian Doherty. I am sure that I am not alone in that revelation, and it is a tribute to journalist Oliver Kay that he has brought to print the sad, poignant, yet also happy  life of one Adrian Doherty and we and many others will ask the question....what if?

This biography is not so much a story about a young man's career (or lack of) at a professional football club, but rather it is the study of a loveable, gentle human being who was never hypnotised by the glamour and potential wealth that his position  as a winger in the great Untied youth team of the early 90's, and hopefully later a member of the main United squad, would undoubtedly bring. Here was a country lad from the homely streets of Strabane set adrift in a big city called here simply by the talent he showed from a very early age as a professional footballer. The one similarity between Doherty and the great Best is that when first called to Manchester to confront their destiny they were both allocated unsatisfactory lodgings. It seems that in the 23+ years that separated their two careers United had learned little in the way of how to make their new prodigies feel wanted and cared for. Here we have two shy Irish lads (not much older than children) fresh from the homeland with no real social skills and expected to fit in immediately with a tough but rewarding training scheme. George soon found help and companionship in the form of alcohol (and we all know how that ended....Where did it all go wrong George?) and Adrian found true love and companionship in his song, and poetry composition, and playing his guitar. This lonely, loveable individual often busked in Manchester city centre preferring his own company to that of the talented United youths who lodged with him; Giggs, Scholes, Neville to name but a few...."he was stuck in Manchester with no money and didn't know what to do. I set off as soon as I could, but when I got there, he was nowhere to be seen"....

So surprisingly for a biography of a Manchester United potential there is no accumulation of wealth, there is even no first team appearance.....but oh how close Adrian Doherty came. The cruciate ligament knee injury that he suffered might have benefited more some early intervention but that did not happen and together with the fact that in the early 90's the treatment of a knee injury was crude compared by today's standards meant that the young footballer's hopes and dreams were never to be fulfilled. Yet that is the funny thing, in reading this book I am struck by the fact that Doherty was not really concerned with a career in football, at one of the greatest clubs in Europe, in fact when offered a 5 year contract said he would much rather sign for 3 years....who in their right mind would ever suggest this? Adrian Doherty's talent meant that whether he liked it or not his wonderful footballing skills meant being sought after by top premiership (1st division) clubs. Do not be mislead a young Adrian loved playing football and he was exceptionally good at it but if football had not been present in his life he was more than happy to busk, play his guitar and write poetry and lyrics that the great Bob Dylan would have been proud of. When the knee injury destroyed his career he was content to live the life of a hippy/hobo dwelling for short times in places and cities (his choice of Preston to live was the result of sticking a pin in a map!) And yet there were still wonderful times ahead, the folk scene in New York and surprisingly the city of Galway which was the home of dreamers and would be poets and artists.

His death, just like his life, was unconventional and very sad as he slipped or tripped into a canal in Holland rescued but never emerging from a coma. There are those who say that Manchester United let down their young football genius by failing to deliver the home from home environment that was promised but I do not agree. They treated as well as they could given the standard and success or otherwise of knee operations at the time and finally, when the sharp skill and potential he showed never really returned, they reluctantly let him go. United were fast emerging as one of the greatest teams in the world, and Alex Ferguson as their manager had to control and direct this emergence which often meant making hard commercial decisions.

This is an exceptionally sad story, and without the research and persistence of Oliver Kay so many would have been unaware of the impact and legacy that Adrian Doherty left in his short time here. Highly recommended