Great second book in the series 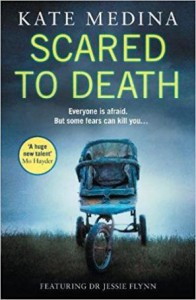 Two young men, Danny Lawson, Stephen Foster are dead and a third Ryan Jones is seeking help and counselling from psychologist Dr Jessie Flynn. Are there connections? and can Jessie discover and uncover the closed mind of young soldier Ryan, a deeply troubled and disturbed individual....."He started to fidget, fingers picking at a thread that had come loose from the stitching of his navy blue beret. His nails had been bitten to the quick, the cuticles raw."

This is the second book in the Jessie Flynn crime series and just as enjoyable as the first. It is not so much the story that is at the heart of Kate Medina's writing (although a well structured thriller is always vital) but rather the characters that adorn those pages with all their weaknesses, self doubts, and insecurities, and at this the author excels. Jessie is the central figure a fine and dedicated psychologist and yet possibly one of the most flawed, sensitive and self doubting individuals I have ever encountered. She has borne courageously a troubled childhood with her father departing the marital home, making her feel responsible for her younger, and sick, brother Jamie...."My father dumped me when I was twelve, dumped Jamie when he was only five, sick, dying. He dumped all of us for that...Bi**h" This has tragic consequences when Jamie commits suicide and is discovered by Jessie on her return home, something she will never recover from feeling responsible for his death as she was not present when it happened. She suffers from Obsessive Compulsive Disorder indicated by her extreme sense of order...."She put the kettle back on its stand, straightened the handle flush with the wall"......"the bread and butter lined side by side on the top shelf, an identical space between each item."

Captain Ben Callan is employed as an officer in the Special Investigation Branch. He previously served courageously in Afghanistan and as a young soldier...."he had already taken two bullets whilst on duty. The first a gift from the Taliban eighteen months ago in Afghanistan, still lodged in his brain; the fallout permanent seizures, manageable at the moment with drugs..." Captain Callan has not disclosed his tenuous and fragile health prognosis to his employers for to do so, in his opinion, would surely mean his instant dismissal. As a result of this injury the unfortunate Callan now suffers seizures and blackouts manifesting in the form of epileptic fits. There would appear to be an attraction between Ben and Jessie possibly two wounded souls seeking comfort in the arms of the other. This is something that the reader really hopes will happen, will they or wont they is an occurring theme throughout the story. DI Bobby "Marilyn" Simmons contributes a little light relief if only for the fact that his nickname..." which he had acquired on his first day with Surrey and Sussex Major Crimes thanks to an uncanny resemblance to the ageing American rocker Marilyn Manson.

So with some great leading players and an enjoyable story that results in the exposure of a well hidden killer this the second book in the series draws to a dramatic close. The author has created a wonderful heroine and there must certainly be many more secrets to discover in the further adventures of Jessie and Ben in book 3 of the series. Many thanks to the good people at netgalley for supplying me with a gratis copy for an honest review and that is what I have written.