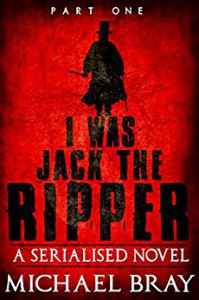 A bit of a disappointment for me as I previously read and really enjoyed  Dark Corners and Something in the Dark. In "I was Jack The Ripper" (part 1 of a series) the author has contrived to create what he thinks is a clever plot...Charles Hapgood, author, receives a visit one night from a man claiming to be Jack the Ripper and is eager to tell his story and explain his actions. So we follow a testimony of debauchery  where our supposed notorious ripper killer attempts to explain how he was transformed from an ordinary child to a monster of historical significance. Michael Bray is a writer of extreme horror and dark fiction,  not something I am particularly fond off as the reading is often comparable to watching slasher horror movies such as Scream, A nightmare on Elm Street or Childs Play (with that cute little Chucky doll) There is little in the way of story just gratuitous violence which will undoubtedly be continued as further episodes of this serialized narrative are released.