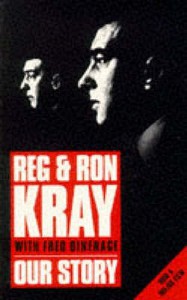 Reg and Ron Kray Our Story as presented by Fred Dinenage (presenter and broadcaster) is almost a “fly on the wall” journey through their violent and somewhat sad and most certainly wasted life. It is a real taste of London of the 60’s and a look into the lives of the crooks and gangsters who made a living by intimidation and murderous intent.

The greatest influence and love of their live was their mum Violet certainly not their dad Charlie who was akin to a James Beck (Dad’s Army) figure...a bit of a spiv and there is a lovely description of Charlie “ducking and diving” in the twins early years....”He was a small, dapper bloke who before the war, had been a pesterer – he’d travel round the better-class areas trying to persuade people to sell him their nicknacks, bits of gold and silver, even clothing, which he would then resell for a profit. He was very good at it. He wasn’t a fighting man, like the rest of the men in the family, but he was a hell of a drinker.

As teenagers all they cared about was boxing and so good were they that opponents stood little chance against them, often receiving publicity in the London papers...”So remorseless was Ron Kray that he sent Goodsell to the canvas no less than five times – the fifth time for keeps”

Ron and Reg saw themselves as a couple of tough lads who could handle themselves if anyone got stroppy or challenged them. This was fine if violence of this nature was controlled and more importantly used in a professional nature such as boxing but the twins loved fighting for fighting’s sake, they would not be told what do or accept any figure of authority.....”then he did a very silly thing-he held on to my arm and tried to stop me leaving. I turned round and smacked him hard on the end of his jaw. Like the young copper, he was in dreamland for a few minutes. And Reg and I were on our way home to Vallance Road for a nice cup of tea with our mother.” I love that final image the boys having a cup of tea with their mum!

For a short time during the 60’s they used the violence, influence, intimidation and most importantly their menacing presence to become the most powerful and feared gang leaders in London. They owned a number of successful clubs such as Esmerelda’s Barn where the rich and famous stars were happy to visit and be seen in the company of the two brothers. Judy Garland, Stubby Kaye, Barbara Windsor, Danny La Rue, Diana Dors, Alan Lake were often to be seen in their company and indeed the twins at one point were attempting to form a link with the Mafia. Unfortunately Ron and Reg began to believe in their own invincibility and should have heeded the words a Mafia boss Angelo Bruno once said to them....never do your own dirty work and never trust too many people.

George Cornell made the mistake of calling Ron Kray a “fat poof” and Ron strolled into The Blind Beggar public house in Whitechapel and shot him through the head with his Luger pistol. Jack “the hat” McVitie, a vicious thug himself, was stabbed repeatedly in the face, chest and stomach, by Reg, as part of a violent struggle at a party in Evering Road Stoke Newington.

The Kray twins were convicted of murder in 1969 and sentenced to a minimum of 30 years They believed that their life sentence was unjust and that after many years in custody they had fulfilled their duty to society and in their own words...”Ron and I killed one man each. Both of the men we killed were violent men, gangsters, One by his own admission, had already killed another man. The other had shot and wounded at least one man and would almost certainly have killed another- given the time and the chance he would have killed me. For that we have spent more than twenty years in captivity, often treated worse than wild animals.”

Ron and Reg Our Story allows the reader to feel part of an interview that is taking place between the author and the interviewees. It is a style of writing that works very well and presents the coherent facts in an easy to understand and intelligent manner. It gives a good insight into gangland in 60’s London and asks important questions about our judicial system.

Ron Kray passed away in Broadmoor Hospital in 1995. Reg was finally released on compassionate grounds in 2000 before losing his battle with cancer in October of that year.