Truly brilliant and emotional writing of the highest order.... 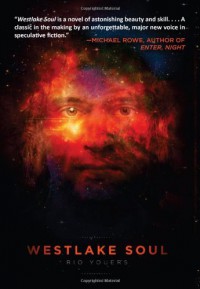 Westlake Soul dwells in a permanent vegetable state following a surfing accident and he is now lives (if you can call it living) back home with his family. Although he cannot communicate, through his mind and his thoughts we travel with Westlake as he spends what remaining time he has in the presence of those he loves and who in turn love him....there are so many poignant moments in what undoubtedly is a memoir of a young man who constantly asks....what if? Nadia, the girl he was with, on that fateful morning cannot bear the pain and suffering and so there is one final visit....

" Those two words again: if only. She put her ipod and headphones back into her beach bag and stood up. The soles of her sneakers squeaked on the floor as she walked toward the door. One final look over her shoulder, the last wedge of snow sliding from her roof. I lay among my tubes and lines like a torn parachute. My cardiac monitor chirped. The door closed softly behind her." The family decision is taken to stop intravenously feeding Weslake and to grant him release from this living death, and so they gather around his bed in one final show of strength and love...

"This is going to be a night with Westlake," Dad said, parking my chair in the middle of the room before taking a seat next to Mom. They clasped each other's hands and that was nice to see. "A night for Westlake. We don't know how long we're going to have-" And here he stopped and his face stiffened and Mom rubbed his back. "We don't know how long Westlake has got, so we're doing this tonight, as a family, united in our love for him, and with a wish that our beautiful son and brother finds everything he wants in the next life."

There is a location at the midway point where Westlake uses the analogy of a plane crash to describe the situation he finds himself in…..

“ It wasn’t this fabricated news scene, or the thought of the crash itself- of dying- that unsettled me…but rather the thought of the time it would take for the plane to slam down to earth. Three minutes- or however long- of knowing you are about to die, of hearing the screams of the people around you, complete strangers, who know the same. A different timbre of scream. Harrowing. Pushed out on the final breaths. That’s what unsettled me. The time. And that’s what I’m experiencing now. My plane has lost all four engines and I’m nosediving toward my doom. I used to think that three minutes was a terrifying long time to know that you’re about to die, but it’s nothing – positively heaven- compared to one whole week. Or two”……..

Amidst all this pain there are some lighter moments of humour…Yvette is Westake’s permanent help/nurse and quite often displays bruises from yet another impromptu beating from her boyfriend Wayne. “I’ve told you very little about Wayne, but I’m willing to bet you’ve a fairly accurate picture of him in you head. The kind of guy who has Kimbo Slice wallpaper on his cell phone, and who thinks The Expendables should have won ten Academy Awards.”….

I truly love this story it is a story of sadness, a story about human nature and the bonds of family and love, and a story that ultimately can only have one ending…..but travel with us, travel with Westlake as he rides the big wave and sets out to meet his destiny and embrace his maker….