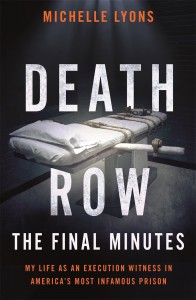 Michelle Lyons acts as a go between for the Huntsvilles Walls unit in Texas and press, families etc. Essentially Death Row is a chronicle of the time she spent there, the prisoners executed and the people she knew. The novel reads like a diary as she recalls those awaiting death by injection and explains how attached she became to so many. There are some interesting facts such as the number of executions greatly increased under the Bush presidency and delays of up to 20 years before most residents could expect their final meal in preparation for that unavoidable meeting with their creator. I find it difficult to write a review on this book as it is essentially just a record of her time at the unit, how it affected both herself and her immediate family (she was divorced twice) and how she was forced to retire due to intimation and bullying.