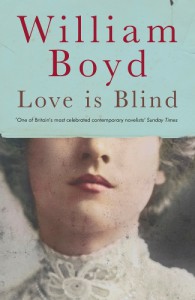 Love is Blind by William Boyd is a truly memorable story with wonderful characterization. His colourful writing instantly transports the reader to Scotland at the end of the nineteenth century and continues the journey through mainland Europe at a time of great change and gathering turmoil in the years immediately preceding the 1st World War.

Brodie Moncur is a piano tuner in the employ of Channons of Edinburgh and when the opportunity is offered to manage the Paris store he readily agrees. Brodie is an ambitious and proactive manager and believes that the best way to expand and promote the "Channon" brand is to employ the services  of piano virtuoso John Kilbarron thus advancing the Company's pianos throughout Europe. This association leads to a fateful meeting between Brodie and the beautiful alluring Russian singer Lydia Blum, Kilbarrons on off girlfriend. A passionate clandestine  affair develops that results in Brodie and Lydia fleeing from city to city hotly pursued by Malachi Kilbarron seeking revenge for his wronged brother.

I often think that the mark of a good story is the author's ability to take me the reader with him on a journey of discovery, to remove from the mundanity  of modern living and surround me with the smells, sounds and excitement of the animated world he is describing. We therefore enter the preserve of piano virtuoso's at a time in history when piano use and production was at its highest and live performances  although the privilege of the wealthy still attracted a mass following. Welcome to a place where the combustion engine has made an entrance, where consumption has destroyed the lives of young and old, and when true gentlemen resolved their differences by resorting to a dueling contest.

An exciting story brilliantly executed by one of England's greatest living authors..Many thanks to the good people at netgalley for a gratis copy in exchange for an honest review, and that is what I have written. Highly Recommended