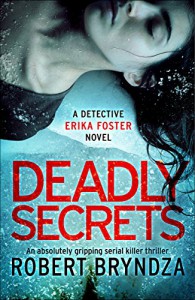 What starts off as something quite ordinary actually explodes into life in the final chapters and produces an ending impossible to predict but beautiful in its execution. On a cold winters morning the body of a young attractive burlesque dancer is discover frozen outside her home. As the investigation develops the perpetrator is identified as a tall man dressed in black wearing a gas mask. When a number of further attacks are recorded the race is on for Detective Chief Inspector Erika Foster to bring a corrupt and twisted individual to justice as soon as possible.

The character of Erika Foster is what really attracts me to the books of Robert Bryndza. She is a relatively young woman in her early 40's traumatized  by the death of her husband Mark when an earlier investigation ended in tragedy. In Deadly Secrets Erika reveals her loneliness and inability to retain a personal relationship, her sadness as the possibility of motherhood begins to fade, the changing of her body and mood swings as she struggles to accept the approach of menopause. To mask this unhappiness and despair she turns inwards accepting the dangers, toils and demands of her job as a senior member of the police force in charge again of a major investigation...."So much in her life was out of control, but she had the power to track down whoever had done this. And she would".....When Erika is unexpectedly called to Manchester to aid in the recovery and rehabilitation of her father in law Edward the command of the murder investigation is passed to DI Moss and no one could foresee the chain of events that quickly followed. An attempted arrest almost ends in disaster and Erika, having returned to the capital, once again takes control where a startling discovery turns the investigation on its head leading to the apprehension  and detention of the most unlikely culprit.

I was a little disillusioned with the first part to this novel and found the idea of a suspect using a gas mask as part of a disguise a little unbelievable. However DCI Erika is such a wonderful "ballsy" character and I love the way the author is developing her psychic, exposing her weaknesses but equally championing her strengths. There is such a sadness and need under that tough veneer and I look forward to the next instalment of an excellent detective series. Many thanks to the good people of netgalley and the publisher Bookouture for a gratis copy in exchange for an honest review and that is what I have written.