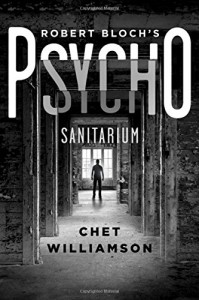 Few will forget the last image in that great Alfred Hitchcock classic Psycho when Norman Bates is seen isolated in a protected cell with the immortal words from his mother incarcerated in his mind..."She wouldn't even harm a fly"

In many ways Sanitarium by Chet Williamson tries to encapsulate both the mood of the movie and the somewhat concerning "mother" thoughts that still dwell within the mind of Norman. Added to this is the deep feeling of uneasiness that exist not only  in the hospital itself but also amongst fellow residents who have similar murderous afflictions to Norman. This creates a constant tension, the reader can never feel complacent as the volatile residents are liable to explode into violence at any time.

One such resident is a man called Miller who, as a great admirer of Norman Bates, is hoping to learn from him. Miller is a convicted rapist and he feels that by introducing murder into his rapist illusions he can create the ultimate sexual high. Episodes such as this are an everyday occurrence and the staff and doctors must remain vigilant and at a high state of readiness. This story is really a glimpse inside the walls of a building where the patients have no hope of release and must live a day to day existence in the human equivalent of a fish bowl where their every move is observed, their every action noted, and where violence and the unexpected are the accepted norm (no pun intended)

This is an enjoyable but unsettling tale and shows a world where all hope is gone. It was a help to me as I had seen the original movie and the images created by that classic fitted perfectly into the story. I received an advance copy of Sanitarium for an honest review and that is what I have written.