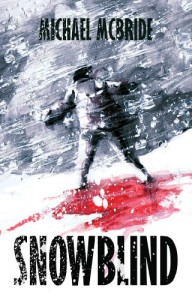 I love the way Michael McBride has left the door of this brilliant short novel open (even though that door is cold and there is snow coming in!!) for a sequel. I also found his notes informative and very useful for the enjoyment and progression of the story, in particular the subtleties in the naming of the “Alferd Packer Grill”

The use of landscape blended with unexpected and extreme weather conditions is a very powerful tool in the hands of an accomplished author. Who can ever forget Jack Torrance newly appointed caretaker at the isolated and snowbound Overlook Hotel and the sad events that followed.
4 friends Coburn, Baumann, Shore and Vigil are once again embarking on their yearly elk hunting expedition to the aptly named and snowbound Mt Isolation. They are forced to seek refuge when Vigil suffers severe trauma and injury in a fall and are now along surrounded by the harsh elements of nature and something evil and unknown....the scene is set! “Someone or something was still out there. Watching them. Waiting”...

A horror story (to appreciate the full effects!) is best enjoyed alone and possibly with the aid of an alcoholic beverage as the silence and tension can be unbearable. I sometimes read very early in the morning and approaching winter, here in the UK, the wind may be howling accompanied by a little rain....and then I read the following....

“Coburn crept closer, prepared to grab the branch, toss it away from the house, and sprint back toward the open window. He had already loosened his grip on the rifle when his brain caught up with his eyes. It wasn’t a branch. It was a hand. A human hand at the end of a severed forearm.Tied to a bent, rusted nail in the door by a tendon. Swinging gently back and forth at the behest of the wind. The curled fingers raking the wood.Scratch.....Scratch....Scratch...”

An important element I use to judge a good story is....Do I think about it the following day? Where is the author going? Are the characters real? Can I sympathize with them?....more importantly in a horror story....does it scare the hell out of me?? Let me tell you dear readers of my review that I cycle to and from work each day (ok you say what has that got to do with it....hold on I will tell you!) My 12 mile route home in the evenings is dark and lonely with only me my bike and my little light for company...the mind plays funny things and “Snowblind” became my mental companion this week as I struggled through the darkness....what was that I began to see to my left and right....????

“A lone silhouette separated from the shadows. Large and hunched. Low to the ground. Was it a bear? He couldn’t....couldn’t quite tell. He tried to zero in on it through the scope- Another silhouette materialized from the woods to the right of the first...another to its left...”

Michael McBride has written a novel that blends all the elements of good horror writing to produce a masterpiece of tension and fear and one I will remember for a very long time. Highly recommended!